In December of 2014 my husband and I traveled to San Francisco for his work, and a break for me. I was interested in finding a labyrinth in the city and was not disappointed. We found ourselves at a beautiful Catholic Cathedral, Grace Cathedral, to be exact (Grace Cathedral). We experienced so much more than the labyrinth while we were there, it offered a time of quiet reflection that we both were seeking. Upon entering the Cathedral I was captivated by a large Christmas tree covered in origami paper cranes. Next to the cranes was a description of why the tree was filled with them and the significance of the crane. 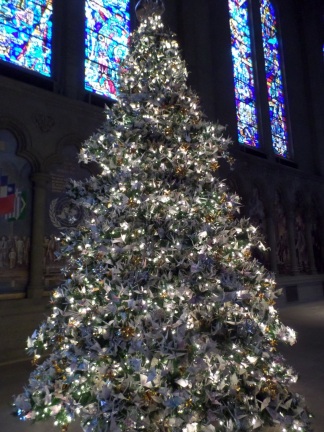 The Japanese legend was that if someone would fold 1,000 cranes the would have a wish granted. Sadako Sasaki developed leukemia after the atomic bomb was dropped in Hiroshima. She set out to fold 1,000 cranes with her wish to be healed. She died before completing her task and her classmates folded the remains 356 she needed to reach 1,000. On each of her cranes she wrote messages of hope. The tree pictured above in 2014 was covered in cranes with the wishes and the dreams of the world. When we left the Cathedral I knew that somehow I wanted to incorporate cranes into the traditions of our family.

In 2014 on New Years Eve we had our first folding of the cranes. All 8 of us wrote on a piece of origami papers our wishes and our dreams for the upcoming 365 days. Once the messages were complete I folded them into cranes and we hung them in our dining room window. I was convinced that I would remember what was written, but as the days of 2015 turned into months I forgot what I had wished for as did the other 7 participants. On New Years Eve 2015 we took our cranes down and reviewed what we had wished for 12 months prior. There was laughing, and delight at the things we had forgotten that had happened without conscious effort. There was giggles at the embarrassing thing that, to my children, our far younger selves had dreamed up. Once we had them opened we read them together and tossed the unfolded crane into the fire releasing our dreams and quickly turning to the wishes of the coming year. 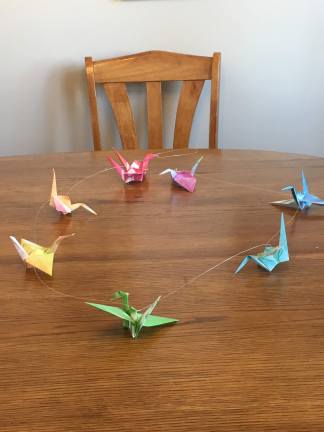 Last year I had the thought to record everyone as the read their opened cranes. I will have to remember to do that next year. When the cranes are freshly written often the words feel to private to share. Over the course of the year the secrecy softens and sharing is much easier.